Along with the cheap gaming keyboard shootout that I recently did I also picked up four of the cheapest gaming mice on Amazon to check out against each other. I don’t get too geeky with the specs on these other than what is listed on the Amazon pages. One thing to remember is that everyone has a different hand and different style of grip. For this review keep in mind that I have a large palm but short fingers so I fit small to medium mice quite well. Every one of these mice fits the category of a small to medium mouse. Again we didn’t come up with this list for you to go out and spend your money so we can make money as an affiliate.

Gaming mice seems to be a vague definition but today that seems to mean colourful LEDs and adjustable DPI settings. It’s funny because not that long ago to get mice with these features you would need to spend a lot of money. The most expensive mouse on my list is $14.99 CAD. The cheapest is $7.90 CAD. That’s pretty incredible really. I will be comparing this to the Zowie EC2-A which is my regular mouse. One thing to note. The boxes were so boring for these mice (in fact one didn’t even come in a box but in a ziplock style bag) I’m not even going to talk about them.

I think what we will do is start with cheapest and go to most “expensive”.

The Poto 1600 DPI gaming mouse promises a few things on it’s Amazon page. They say that the design is ambidextrous. Not really. I mean you could use it in your left hand but then you wouldn’t have access to the back and forward thumb buttons. Also the shape just isn’t right for left hand. There’s nowhere to put your thumb. In the right hand thought it fits rather nicely though the mouse is a bit on the wide side for mice. There is a wierd ridge along the middle of the mouse that would take some getting used to and I believe it may give some fatigue after a while.

It also promises that it’s good for internet surfing since it has six buttons and a scroll wheel. This is true enough. The buttons are all there. The main left and right buttons feel pretty good actually for a budget mouse. The scroll wheel is decent and has a good feel. Actually very similar to my EC2-A but perhaps a little tighter and a bit rough. Pushing down on the scroll wheel reveals button number three and it works. Not particularly satisfying to push down on. I perhaps would like a bit more travel in the button. The back and forward thumb buttons feel much less mushy than the EC2-A but they feel like you could push them in to the mouse frame. There’s also a DPI button that from what I can tell changes the acceleration of the mouse movement as the sensor is supposed to be a straight on 1600 DPI. At that DPI setting with I believe is the middle of three settings the mouse feels the most natural.

The led lighting is a nice touch and would fit in with any computer setup as it rotates through the RBG spectrum. It looks very tasteful with the decidedly tribal sort of graphical designs on the mouse. Interestingly the logo on the back portion of the palm rest says “Jite”. I have no idea what that refers to.

Overall the mouse performs like a mouse. It feels OK in the hand with a slightly rubbery outer shell but the width of it may put it out of contention. The mouse has a braided cord which is something even my premium EC2-A doesn’t have.

The JETech wired backlighting gaming mouse also makes a few promises but it doesn’t push too hard. It gives a few facts that are nice to know and I think I may even believe them. The specs on the manufacturer’s website are the same as what is mention on the Amazon page. This is not an ambidextrous mouse and JETech does not claim to be one. It actually is really comfortable in the hand reminding me of some Razer designs (that said I have never owned a Razer mouse but the style is similar). It fits my hand quite well.

The mouse features Kailh Micro Switches thoguh I am unsure whether they all are or not. I’ll be honest and say they all from the left and right mouse button to the forward and back thumb buttons feel incredibly consistant. The slightly rubberized coating in nice and the static led lighting looks good as well. If anything the DPI button is too far back on the body. The good news about the DPI setting is that for a cheap mouse it doesn’t feel like the mouse is messing with acceleration. The movement feels very linear on all four settings (800, 1200, 1600, 2000). The scroll wheel is a bit wishy washy in movement but not the worst I’ve ever felt.

Overall I really like this mouse and for $7.99 CAD it is an amazing value. The only thing I could do without is the blaring red LED on the back of the mouse. It doesn’t fit the look of the mouse that great. Maybe a blue one would have been better. This mouse is the only mouse of the four that does not have a braided cord and it does suffer from having a much more tough rubber cord making the cord a bit unweildy. Not terrible but for some that may be a deal killer.

The iKross G2 IKPC33 as it’s called on the mouse itself is another six button job with many of the same features the other mice have had so far. The specs mentioned on the Amazon page are actually accurate and identical to the iKross product page. This is a right-handed mouse (sorry lefties, I’m sure you are detecting a theme now). This mouse has a great ridge to rest your thumb on which is very remeniscent of the Logitech Performance MX mouse which I recently retired but still love. This is by far the most comfortable of all four mice. My hand fits almost as perfectly to this as my EC2-A.

So all the requisite 6 buttons and scroll wheel are present here and they all feel fantastic. Even the back and forward thumb buttons. The only complaint I have here is the positioning of the scroll wheel. It’s just a little to far forward for my taste but it is still usable.

LED colouring is nice but the rest of the colour choices on the mouse are a bit confusing. The iKross “G” logo is in a bright yellow-green. The led lighting is in blue. And the braided cord is red and black. Wierd choices to be honest. It’s very comfortable though so I’d look over that. The DPI settings again feel very linear again and I don’t detect any acceleration. Very nice. I could recommend this as well to anyone that wants a cheap but decent gaming mouse. 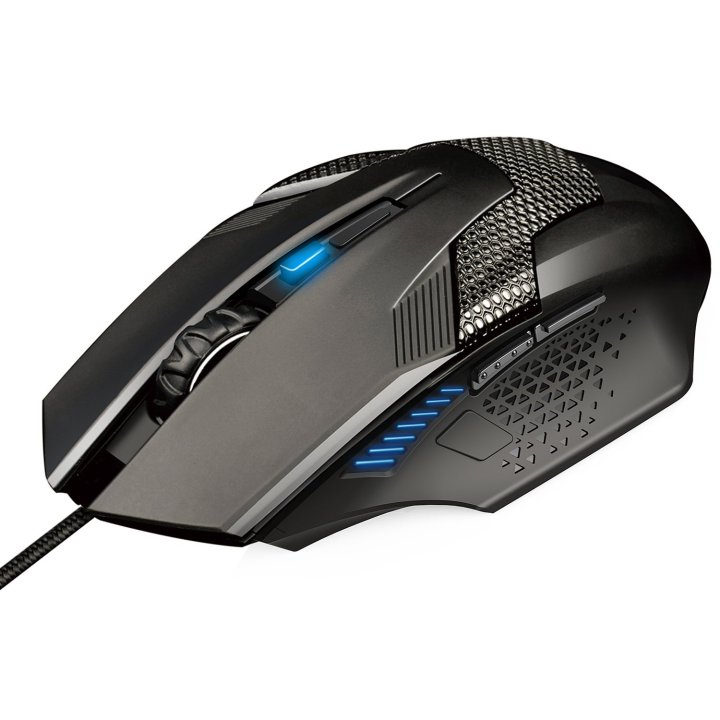 The TeckNet Raptor gaming mouse is the last and most expensive on the list. So far I have been incredibly impressed by what you can get with these budget mice. This is yet another 6 button mouse with scroll wheel with some LED lighting. The Amazon page is factual once again listing the facts on the mouse properly. This mouse is technically ambidextrous but you can only access the back and forward thumb buttons on the left side of the mouse.

The left and the right buttons feel pretty good. The scroll wheel is too loose though not giving much feedback. The pressure required to push on the scroll wheel mouse is actually pretty good. The back and forward thumb buttons are very loud but they are not mushy which is nice and are located actually in the perfect place for my thumb. The DPI button feels good and the settings are set in OK steps (1000, 1600, 2000). I am not sure if this is a true 2000 DPI mouse. It feels like there’s some acceleration in play here.

The shape of the mouse is great until you factor in the ambidextrous design. I am right handed and my pinky has nowhere to rest due to the design. It’s actually off-putting enough that I cannot stand it. Quality wise it feels cheap and theres no nice rubberized feel to it and the plastic feels strong but cheap at the same time. The LED lighting is blue but subtle which is fine. I could not recommend this mouse which is too bad since it’s $14.99 CAD.

I encourage you to read my review on the Zowie EC2-A and while it doesn’t compete in this category it’s worth it to know what a real quality mouse can do. My top pick here is the JETech. Really comfortable. Looks great. Performs well.