I wrote a story not too long ago on the state of GPS devices for commercial trucks and how it has changed over the years. I mentioned in that story that I preferred to use Google Maps nowadays but since then a couple things have happened. I got a huge charge for being over my data. That is something you have to think about here in Canada as our data caps are low and our overage charges are ballistic. That has now changed for me as my provider has allowed me to double my data for nearly half the cost.
After this problem I decided it would be an interesting challenge to choose or build my own GPS. Yes I said build.

Right around the same time my Dad, who is also a truck driver, decided he was tired of his ancient hand-me-down Rand McNally and to get something that was more up to date. He wanted something bigger and easier to read and tasked me to find a ready made solution.
In this day and age there are really only two brands on the market building GPS devices with commercial truck routes in mind. If you have never driven a truck, the next time you go to work or a supermarket pay attention to your route. You may notice that there are no truck signs posted in some places. GPS devices aware of commercial truck routes will avoid those non-truck roads. Anyways, the two brands available now are Garmin and Rand McNally. TomTom used to have a commercial product but as far as I can tell they no longer do. 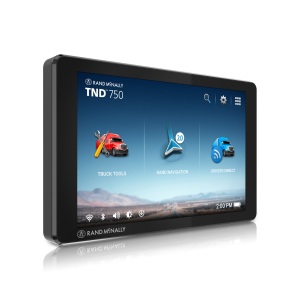 Commercial GPS devices are also very expensive compared to their non-commercial counterparts. Usually a good hundred or more dollars depending on the size and screen. The choices ended up coming down to the Garmin DEZL OTR700 which is Garmin’s seven inch offering. The other model in the same size range is the Rand McNally TND 750. They are within 25 bucks of each other in pricing but offer mainly the same things.
The choice was really made for me. The Rand McNally TND 750 has such bad reviews due to software and hardware that I had to go with the Garmin. That meant spending the extra 25 bucks I mentioned earlier. 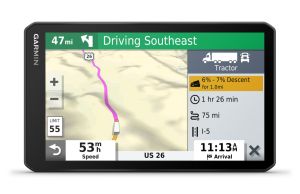 $579 CAD later, and after a couple days of waiting, the Garmin DEZL OTR700 arrived. As someone who has used several GPS devices in the past I was impressed by how it felt in the hand and the overall build quality. I was also happy to see that it had a window mount that didn’t look like a monkey designed it. As my dad doesn’t really understand all that is tech I immediately plugged it in and began the setup process which included a bunch of updates that it did after I had connected it to the wifi in the house. 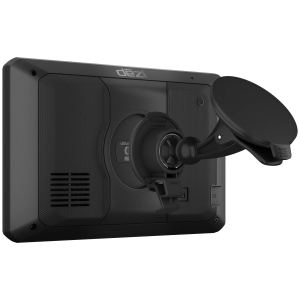 The DEZL OTR700 boasts a 6.95 inch capacitive touch IPS screen with voice control. Where they go cheaper on these devices is their battery life though Garmin claims the OTR700 can run for two hours on a charge. That is impressive compared to older GPS devices. They also tend to use lower performance hardware than a standard android tablet.
When it comes to navigating on the OTR700, if you have used any GPS device in the past this will be no different. You can navigate via address or points of interest. You can also find your destination manually.
As for other settings you can add the configuration of your vehicle or what type of roads you want to prioritize. You can also set your units of measurement since many truck drivers cross between Canada and the United States.
Pretty standard stuff really. My initial thoughts upon testing was that it was very easy to use but the real test was to see how my dad fared with the OTR700.
The first thing my dad mentioned is he hates to be nannied by software. The first screen that comes up after the OTR700 is booted up shows a warning screen telling the user not to use this device while driving. Not only does he (and I by the way) find this extremely annoying, it’s ironic for a device, that can detect it’s own movement, to immediately follow that screen with the screen to enter your destination. For a professional device there should be a checkbox to never show that again. Yes, truck drivers are professionals no matter what you may think.
The next thing dad mentioned was, even with commercial routing on board it can still give bad routing. For instance, there is a road we use to go to one of our company’s terminals and the route that all trucks take in the area, and is specifically a truck route, the OTR700 tries to avoid it. I have discovered the problem. Someone who scouted the route saw a no trucks sign except it was posted on the truck route and not on the intersecting road that the sign refers to. It clearly says right below the sign that it’s for the intersecting road and not for the one going straight through. Sadly that kind of thing is so typical for the Canadian side of things because everything tends to be done half-assed here.
Another curious thing he has found is sometimes the OTR700 can’t find an address in Canada when he is in the United States but as soon as he crosses the border it finds it immediately. That’s just stupid.
He has also noted that when the GPS turns off after he has gone to bed for the night, when it powers up in the morning he has to go through a couple screens just to get to recent destinations and select his destination once again. He says, and I agree, that it should automatically just bring up the previous destination and have it ready to navigate.

Building My Own GPS 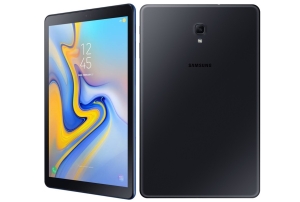 The other part of this story is building my own GPS. I was able to build my own setup for almost half what the Garmin DEZL OTR700 cost and my gps is more capable in so many ways.
First I needed a platform. This meant I needed an android tablet with LTE cellular built in. You can use an Apple device if you like but I refuse to touch their stuff and won’t be covered here except to point out you will need an LTE version of one of their iPads as well. It’s important to note that even if your tablet has LTE cellular built in you do not need a phone plan or SIM to use it’s GPS capabilities. 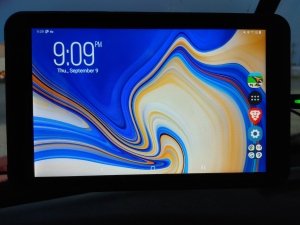 The best value on the market that you can still buy new is the Samsung Galaxy Tab A 8 2018 model. You can find them used relatively cheap as well. I found mine new, open-box but never used on Ebay for just over $100 CAD. An incredible deal. Even better, the tablet is still being updated with security and feature updates by Samsung.
I also purchased a magnetic window mount made by APPS2Car off Amazon (M02 Pro-S02) and attached the included adhesive metal plates to the back of a Spigen Armor case that I also purchased from Amazon.
That’s it. Hardware complete. But, as you may have noted. What about GPS software? 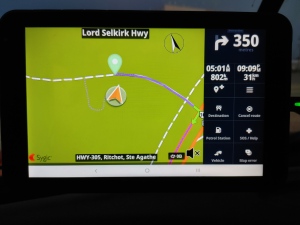 Well I had two options. Since I had gotten a better data plan I could just use Google Maps as I had been doing for a few years. Or I could use one of a couple apps offered on the Google Play store. There are many apps that claim commercial routing but are actually just a skin over Google Maps. The apps that have their own map data are CoPilot GPS Navigation and Traffic and Sygic Truck and Caravan GPS Navigation. Another highly rated app is Trucker Path but it is just a smart overlay on Google Maps as I have mentioned before.
I wanted something that could download all the maps I wanted so I didn’t have to use data which again left CoPilot or Sygic. Now I wanted to use CoPilot but they only offer a monthly or yearly plan to use their software. No thanks. If I’m buying your app it’s a one time deal. Sygic offers a forever license with 3 years of map updates for around $150 CAD. That’s better than $100 a year for CoPilot as far as I’m concerned.
So far Sygic has been on par with pretty much every other GPS I have used and much like the Garmin product. I haven’t experienced not finding a location in Canada when in the US or that annoying warning screen like on the Garmin. It hasn’t been particularly amazing but it hasn’t been too bad either. One thing it does that is the same as the Garmin is on that road to one of our terminals. It thinks there is a section of no truck route and wants to take me 50 kilometres out of the way to get to the terminal.
For those of you counting that’s about $300 bucks all in. That’s nearly $300 CAD cheaper than the Garmin DEZL OTR700 my dad bought. And on top of that the Samsung Galaxy Tab A 8 is a full fledged Android tablet so I can use it for everything a tablet can be used for which is great. I like to use it to stream movies or YouTube when I’m parked for the night or just read the news on a bigger screen than my LG Velvet cell phone.

Are there cons to going my route?
Well it can be confusing what tablet to buy if you haven’t bought one before. If you decide to go this way I have a couple recommendations. Make sure the tablet has at least 3GB of memory and 32GB of storage. This information is usually easy to find on listings on Amazon or eBay.
That said I would stick with a name brand like Samsung, LG or Lenovo. Some of the listings on eBay for the Chinese branded tablets can be misleading or entirely wrong. And while Amazon’s returns are very easy I’d personally have the right device the first time.
The Garmin does have louder speakers if you want your directions read to you. I personally find that annoying and almost insulting as I study the routes I am taking. The Samsung Galaxy Tab A 8 has only one speaker and it is very quiet at maximum volume. In fact you really can’t hear it inside the truck cab while the engine is running.
I am very happy with the way I went and I think if I had done this sooner I would have done the same for my dad and saved him some money as well.
On another note I had thought I would try using the Samsung Galaxy Tab A as a dash cam as well but it really doesn’t work in this case. The camera on the tablet doesn’t have image stabilization built in and it doesn’t have nearly wide enough of a view to be effective. It was worth a shot and I may play with it again but for now I’ll stick with my Vantrue dashcam.
You can follow the same steps and make your own GPS for your car as well and use a non-commercial gps software or even just Google Maps and save some money as well.
Let me know what you think of these two GPS devices. Which way would you go?