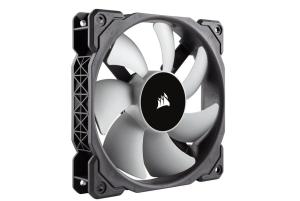 When Corsair, with much fanfare, announced their new magnetic levitation case fans, they had PC fan enthusiasts everywhere squealing like fangirls.

The idea certainly intrigued me as I’ve always found maglev technology oddly interesting. I was curious to see what the tangible benefits would be. Corsair boasts an impressive range of 400-2400 RPM and 12-75 CFM of airflow, controllable by PWM. They also claim low noise operation (16-37 dBA, depending on speed), with no bearing noise.

As I’ve been working on a (surprisingly long, tedious, and expensive) project to make my personal rig as quiet as possible, I decided to call up my friends at Newegg to hook me up with a two-pack of the ML120s….but since I’m not a well known reviewer of any kind, dislike phone calls, and actually have no friends at Newegg, I mean to say I bought them online.

When compared against my fluid dynamic bearing BitFenix Spectre 120mm PWM fans running at the low RPM, both are barely audible. However, as you start to ramp up the RPMs, the ML120s get louder more quickly.

Now, this might be a subjective observation. The ML120s give off a more notable humming sound as opposed to the Spectres.

All that said, it’s time to look at the positives: they certainly look and feel relatively premium for a fan (and they should, for the price). They are also versatile, as they allow you a very wide range of control and are optimized for static pressure.

In conclusion, are they right for you? Quite possibly yes. I can absolutely see the benefits of a case fan that versatile for anyone willing to pay the premium price and to put up with (or not be able to hear) the hum – assuming, of course, that you want to run the fans faster than 25-30%.