It’s that arbitrary time of month where I regale you all with tales of weird games!

This time is different, though.

This time, I bring a game before you that I didn’t enjoy as much as I normally do with these reviews…but it is certainly still worthy of your attention.

January’s game is This Is the Police.

Yes, I know – yet another management game. You take on the role of the chief of police in a city plagued by all manner of protesters, killers, and just downright crazy people. This thing doesn’t pull any punches, either – you get the full brunt of crime, prejudice and corruption.

You play as Jack Boyd, a 60-year-old cop being forced into retirement against his will. Without giving any spoilers, you follow a rather dark narrative of a man whose life is falling apart around him, leading to a hefty temptation to turn to a life of crime Breaking Bad style.

The story line itself is a highly intriguing premise that the overall game doesn’t quite live up to in my mind. I found it dragged on to the point of near boredom close to the end of the first act and at the start of the third act. The voice acting is mediocre and the graphics are pretty basic.

The majority of game play itself is fairly standard fare – putting together your team of officers and sending them on missions as they gain experience and the like, with some choices thrown in for how they handle varying situations. Of course, that’s when they haven’t invented some creative way to stay home from work that day. You must also decide which calls they get sent out on, as some are false and some are missions from various factions that force you into a balancing act of who to support and who to anger without getting canned or assassinated.

The detectives add a different element than the officers. They are sent out on investigations that bring back clues to big crimes. The clues come in the form of fairly graphic (albeit cartoony) pictures that you must use in conjunction with the eyewitness accounts to piece together a proper chronological order, before ultimately sending your officers out to take down the scum bags. You can take down gangs this way as well. Sometimes these investigations also involve a basic interrogation puzzle as well. 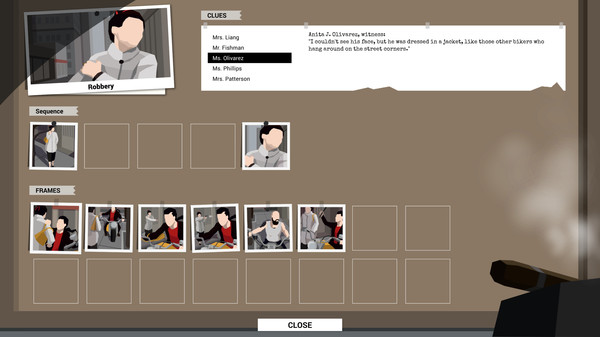 The outcomes to missions are determined based on your chosen personnel’s skill level vs a difficulty factor based on a few variables (including the choices you make for their behaviour), resulting in some randomization. On the other hand, the order and time that the majority of missions present themselves are set in stone, which means that if you screw up and get your squad killed resulting in the need to reload the game, you know what is coming.

Near the end, a new type of mission is revealed that requires you to gather clues similar to the investigations, but lets you use those clues to come up with a strategic plan. I can’t say much more without spoiling the ending, but it left me wishing more of the game was like that.

Unfortunately, the ending really is actually a bit of a letdown and there are, from what I can tell, no real variation in the endings you can get (unless you count getting yourself killed). This might have been a thematic choice, but I always find it a bit underwhelming when a game that involves big choices ends with them not mattering in the slightest.

Overall I put about 25 hours into the game, although you can likely beat it in the 15-20 hour range if you don’t screw up royally as I did at one point. They were 25 decent hours, but nothing to rave about.

At the end of the day, it’s a solid management game with a great theme for around $15, so if you’re looking for something like that check out This Is the Police.