For quite some time I have been toying around with the idea of building a home theatre or even just a Hi-Fi that I could connect to my entertainment devices to get some real decent sound. What ultimately spurred me to go ahead with this was my love for Blurays.

This is a first in a series of articles on building my home theatre system. We’ll focus on the heart of the system today, the receiver and then move on to speakers and other audio sources.

The biggest problem with modern cinematic releases is it’s assumed that you have a surround sound system already and as such have encoded their audio in such away a standard television with stereo sound can’t deliver specific audio bits very well. In most cases audio is setup on Bluray discs assuming you have a centre channel and as such they pipe most of the dialogue through that channel. Having just a regular television with stereo speakers or even a regular stereo Hi-Fi setup means you have to turn the audio up to uncomfortable levels just to hear the spoken word in movies.

I finally got tired of having to turn the audio unbearably loud just to hear dialogue. So I began my search. Initially I had planned on rebuilding my parent’s old Hi-Fi system centred around a Hitachi SR-303 receiver.

It turns out the SR-303 was not a very popular entry-level receiver back in the day unlike it’s higher end siblings and as such is pretty hard to find on Ebay. It did pop up a few times but when I was finally ready to pick up a receiver there were none on the market.

I then moved on to looking at other vintage receivers and none of them really interested me. There were certainly unique designs back in the late 70s and early to mid 80s but they just didn’t speak to me. So I decided to move on to something more modern. This would also allow me to hook up HDMI sources without much trouble and install a surround sound setup (even if the room I have my TV and receiver in is not really ideally setup for surround). This would also allow me to setup a centre channel giving me clear dialogue.

So I decided on a factory refurbished Sony STR-DH550 5.2 surround sound receiver. I have always been a Sony fan and while modern receivers have no character to them at all this was the right price at $169 CAD (now down to $139!). I wouldn’t necessarily recommend refurbished devices to most people but I have had pretty good luck with them in the past. 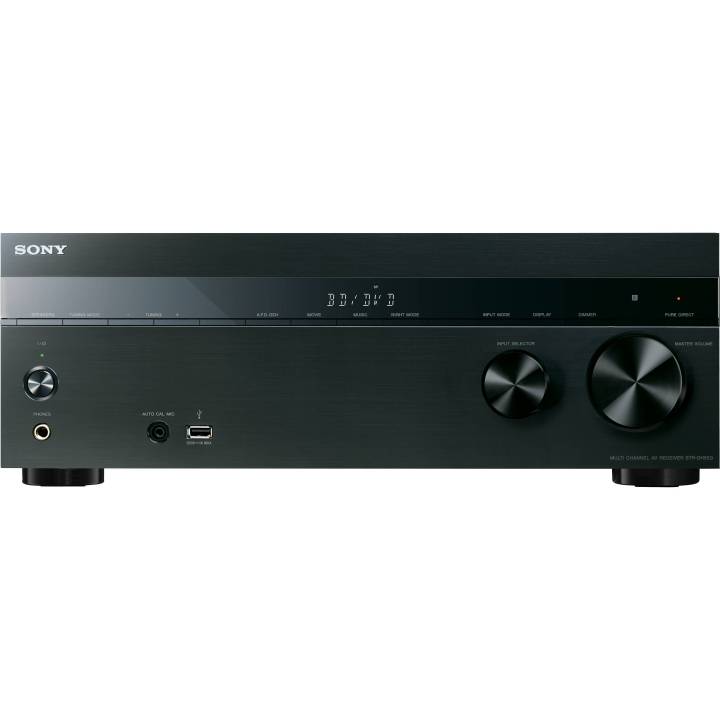 So far the STR-DH550 has been pretty good. The unit itself is alright looking with two large knobs on the front which I think actually makes the unit look slightly unique. It has a single line display which is readable when not too far away but otherwise you will be relying on the on screen display. Of which is not impressive on this device. On most Sony receivers higher up than this model you get a similar interface to the Playstation 3 but on the STR-DH550 we are welcomed by a menu system not that unlike an old school VCR or television. That say it is still functional and all settings are less that three or for button presses away.

On the back of the device we have multiple inputs and for this price the receiver is very well equipped. There are four HDMI inputs, of course one HDMI output, antenna inputs for AM and FM (antennas are included), optical in, optical out, coaxial input, dual composite inputs, one composite output, three stereo RCA inputs, dual subwoofer outputs, and five speaker outputs for right left front back and centre. That’s a lot of connectivity. Something you may notice is there are no hookups for component inputs or output. Obviously the biggest focus for this receiver was the multiple HDMI connections. Which works just fine for me. If I need to hook up component I can do that directly to my Samsung HDTV.

There is another reason I picked out this receiver. It is highly rated for not only audio playback in movies but it is also highly rated for it’s playback of music. And indeed I can agree as long as you have the system set to Dolby Pro Logic II for playback or on the receiver’s automatic setting which is also decent. Anything I play through it on that setting is amazing.

The STR-DH550 also comes with a microphone. Yes, a microphone. It’s a small lapel sized one that you plug in to the front of the receiver. It’s only function is to test your speaker setup and to and configure your speakers automatically for distance to where you normally watch or listen to your movies or music. I decided not to use this and set the speakers manually and from what reviews I have seen this was probably the best way to do it.

The remote control included with the receiver is basic but still useful. While I have configured my harmony remote for use with the STR-DH550 I still tend to use the Sony remote more as it seems to be a bit more responsive. If Logitech is reading this somewhere please speed up your harmony remotes with on screen displays. They are incredibly slow.

Anyways, I have been very happy with the Sony STR-DH550. That said I don’t have a lot of experience with other receivers. Dan has an Onkyo receiver (I nearly bought an Onkyo as well) and it seems to be pretty good too and his game with speakers. Mine did not.

For value though I think the Sony wins hands down. If you are looking for just straight surround sound for movies then there are other alternatives out there but with great audio reproduction on the STR-DH550 I know I made the right choice.