We started recording our first podcast for redbluegreen.ca back in September 2016 and it has probably taken up until now to really get our audio dialed in using the single Blue Yeti recording over USB to PC. We’ve attempted a few Skype call-ins as well and after a few I determined that we would need some better gear before continuing with them.

So Dan and I discussed getting some new gear for the site to really bring production quality up to a new level. It was something that more bugged us than anything. We couldn’t adjust people’s levels individually which really hurt our audio quality sometimes.

So it came down to what we were going to need to actually do this all properly.

1) MIXER (perferably with compression and a shared AUX for all to hear Skype and USB for hooking up to PC. Oh and phantom power)
2) MICROPHONES (three, one for each host)
3) MICROPHONE ARMS (again three)
4) POP FILTER (again three)
5) A PC DEDICATED TO SKYPE
6) A PC FOR RECORDING AND EDITING (editing eventually. right now we still upload to dropbox and I edit from home)

Now these were the minimums really and we already had 5 and 6 covered. Skype will be handled by my trusty old Intel NUC and recording and editing will be handled by CAPSUPREME for which you can see specs on our About page. We also discuss this on RBG Technobabble Podcast 015.

So that left us with finding a mixer, some microphones, microphone arms and some pop filters.

We looked at several mixers from different companies. Behringer, Peavey, Mackie and Yamaha. These were all looked at as they had all had the minimum requirements for our setup. A minimum of three microphone xlr inputs and a USB out function for PC is what we had stated we absolutely had to have.

The Peavey PV10USB had all these things minus compression. While it was quite a professional looking unit we decided against it as we could get compression on on models at half of the 537 dollar CAD asking price of the Peavey. No phantom power also was a knock against as the microphones we were looking at were going to require that.

The Yamaha MG12XU 12 was a really nice looking unit and looked relatively thought out. It had everything we were looking for including compression which again we really wanted to have on board rather that getting a seperate compressor unit. There was no phantom power for microphones on board though and our ultimate pick had that on board. With the asking price of 420 CAD we had to pass as we would still have to buy some extra hardware to use this board properly. 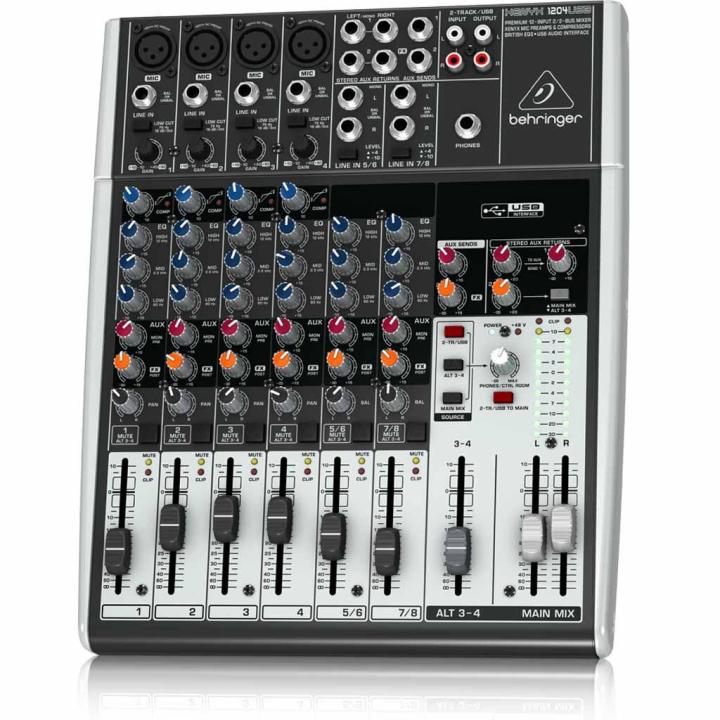 We ultimately chose to go with the Behringer 1204USB. It didn’t include any sound effects that the others did but we didn’t need those anyway. What it did include was everything on our wish list for a the low price of 231 CAD with free Prime shipping. Everything, phantom power, compression and the shared AUX which was a must for Skype. And the unit doesn’t feel cheap either. Now we should mention that the link we have to the Amazon product page is for the 1204USB but we ended up receiving a X1204USB with the sound effects on board. This was a big surprise and even though we don’t need the effects processing we still received a unit that is usually 50 dollars more that what we paid for. One thing of note is this could either be an older or newer version of the X1204USB as the sfx display is actually yellow rather than blue like on Behringer’s website and on Amazon.

It should also be noted that while it’s great to have a mixer you may want to read up on how to use one. Dan and I have an amateur background with these and even so it took us about four hours when all said and done to get it functioning the way we wanted for recording.

When we discussed which microphones to buy I insisted we buy some that were relatively good because I believe that the better the audio sounds good raw and unedited the better it will sound after editing and compression. There are several different microphones out there but we landed on one specifically for now and in time we may upgrade to another.

The Heil PR40 is lauded by most podcasters and even radio broadcasters as one of the best dynamic voice microphones on the market. The PR40 comes with a cost (450 CAD) though and while it wouldn’t require phantom power and wouldn’t pick up others in the room talking in to their mics we just couldn’t justify the cost right now. Down the road when we have more listeners and readers then I will consider moving up.

The Audio-Technica AT2020 actually isn’t the mic most recommend for podcasting and after using it with a few podcasts I have to wonder why. It has a great dynamic range for a relatively cheap condenser microphone and evidenced (with some minor EQ work) on our latest podcasts it is truly impressive at 140 CAD on Amazon. While I would like to get more bass that can be achieved with more EQ work it really is a great microphone. I have read that it is also good for vocal recording as well where the PR40 is not a good choice in that department.

Next on the list were some Microphone arms. Of course another thing we discovered in this process that we would need were shock mounts and of course the XLR cable. Well we found a perfect bundle for us considering we needed three of each of these.

Neewer has a three pack bundle of their NW35 arm kits that come with the shock mounts and xlr cables. Absolutely a great buy at 76 CAD. That said they are not of the best quality but they will do us for now.

There are a ton of these on Amazon. We ultimately went with the cheapest one that didn’t look bad that had free Amazon Prime shipping. We ended up with Dragonpad pop filters. The filter was large allowing us to move a but while we talked while still functioning well as a pop filter. At 13 CAD I honestly thing that’s not particularly cheap but it seems to be the cheapest going rate right now.

So all these things end up and by now you have probably done some simple math to figure out what it would cost to setup a small podcast studio of your own. For us we didn’t have the added cost of the PC’s and to be fair you really only need one. I decided to go with two to add redundancy to the system. If the skype computer crashes it doesn’t mean our recording is lost as it is still recording on the other system.

Total Cost? $766 CAD plus taxes (add another 13% and you get what we really had to pay here in Ontario). So yeah it’s not exactly cheap. We started with a Blue Yeti that costed 150 CAD and it’s a great choice for those starting out as it simply gets the job done with relatively good audio.

That of course doesn’t factor in the cost of the PC’s. You don’t need a power house PC for recording, editing audio and running skype. In fact any quad core AMD APU or Intel i5 should do the job nicely. I’d recommend 8GB of memory but other than that and a large hard drive for storing your raw data and final edits there really isn’t any need for much more.

So there is a bit of hardware required to really get some good audio but I am really impressed by what audio we are getting now. Have you any hardware that you prefer to use in your setup whether you podcast or perhaps livestream? Let us know.